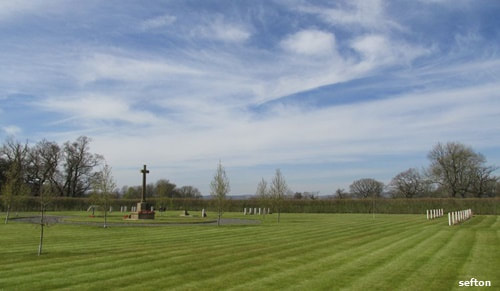 Headstone Photos:   David O'Mara - Croonaert Research Services
During the First World War, the 2,000 bed Queen Mary's Military Hospital was housed in the County Asylum at Whalley, remaining there until June 1920. The Military Cemetery associated with the hospital is at the eastern end of the Mental Hospital Cemetery and was handed over to the War Department in February 1916. The cemetery has a Cross of Sacrifice and there is also a memorial to all the servicemen, nearly 300 of them, who died in the Hospital.
The Military Cemetery contains 33 First World War burials and nine from the Second World War.
Biographies: Cathy Sedgwick
Gunner Francis Thomas Moody SWEENY  28900
5th Australian Field Artillery Brigade
Died of wounds 21-10-1917 aged 32years
Son of James & Bessie Sweeny, New South Wales
Husband of E. Sweeny of Club Hotel, Carrington,New South Wales