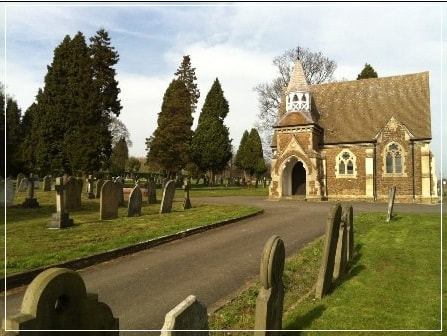 The funeral took place on Thursday, deceased being accorded military honours. The first portion of the service was held in Holy Trinity Church, and the procession from Addington-road to the church was headed by a firing party of The Queen's from the Depot, followed the band of The Queen's (under Bandmaster Adams), which played Beethoven's Funeral March and the Dead March in Saul The coffin was covered with the Union Jack, on which rested the deceased's cap and belt. The bearers were men of the Queen's, and following the mourning coaches was a contingent from Stoughton Barracks, under the command of Major Pain. The service at the church was conducted by the Rector (the Rev. E. C. Kirwan).
The sad procession was watched by a large number of sympathisers, and the committal sentences at the cemetery wore said by the Rev. E. C. Douglas. On the conclusion of the service at the graveside three volleys were fired, and the "Last Post" was sounded on the bugles by Bandmaster Adams, C.Q.M.S. Waring, Sergt. Sullivan, and Drummer Hobbs.
Pte. Sepple was 29 years of age, and before he joined the Army seven years ago was employed the Chilworth Powder Mills. About five years ago he was drafted with the 2nd Leicesters to India. At the outbreak of the war he proceeded to France, where he was wounded in the arm on the 16th Nov. He was brought to England, and taken to the Sussex County Hospital, Brighton. From there he came to Guildford on sick furlough, and he married Miss Louisa Roden.
On Easter Monday he left for France, where he was wounded on the 9th June by shrapnel in the left side of the head, the injuries causing paralysis of the right side, the left shoulder, and left knee. Six pieces of shrapnel were extracted from his skull. He was taken to Norwich War Hospital, Thorpe, and passed away as stated. He bore his sufferings very patiently, and, asked if he was in much pain, said it was a soldier's honour.
The relatives are grateful to the doctors and nurses at the Norwich Hospital, Thorpe, for their skill and kindness.